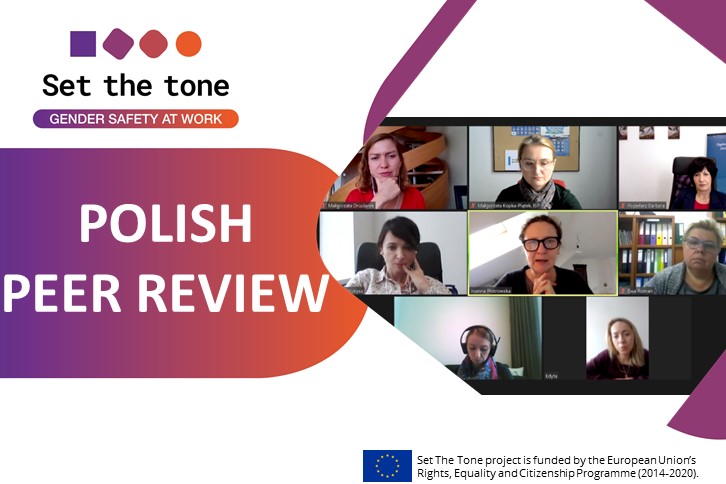 The Polish Peer Review, carried out within the Set The Tone project, took place on 12 October 2021 in Warsaw, Poland and was organized by the project partner, the Institute of Public Affairs. Feedback from the most relevant Polish actors has been collected in order to ensure that future project products would be adapted to the needs of the target group. It had a form of an online event, due to pandemic restrictions and according to the preferences of the experts invited. This report summarizes the main discussion points and recommendations formulated during the meeting.

One of the main objectives of the peer review was to discuss the results of the survey carried out within the project on the level of knowledge of employees of the social economy enterprises on the GBV, with an emphasis on sexual harassment. The meeting was an opportunity for exchanging the experiences of the experts and representatives of enterprises on preventing sexual harassment in the workplace, as well as defining the training needs in a reference to the topic mentioned in the Polish social economy sector.

In the peer review, several topics were discussed, among which the following seem especially relevant:

Among other important highlights coming from this peer review, it was mentioned the importance of the language when talking about sexual violence: bearing in mind that sexual harassment remains a taboo in Poland, stigmatization shall be avoided by using the language referring to the workplace (e.g. reporting instead of accusation) when dealing with the phenomenon described.

The Polish Peer review concluded that the Polish social economy sector has its own specificity that distinguishes it from the same sectors in the other countries, where the Set the Tone project is being implemented. It is comprised mainly of very small enterprises, with a single leader in each of them and very limited administrative capacity. If we add to this the current political situation and policies adopted in Poland since 2015 government elections, clearly standing in the opposition to gender equality principle, as well as the fact that sexual harassment remains a taboo in the Polish public sphere, especially in the workplace, any actions aimed at preventing sexual harassment and increasing the awareness of the social economy sector on the issue seem extremely difficult to be performed. Bearing this in mind, it seems crucial to tailor any intervention to the specific situation and needs of a concrete enterprise, as well as select actions which are realistic and applicable in the Polish context. The role of the Social Economy Support Centres is of key importance and these entities shall be considered as the main target group of the training planned for the second year of the project’s implementation.

“Set The Tone project is funded by the European Union’s Rights, Equality and Citizenship Programme (2014-2020)”

We use cookies on our website to give you the most relevant experience by remembering your preferences and repeat visits. By clicking “Accept”, you consent to the use of ALL the cookies.
ACCEPT - Read More
Manage consent

This website uses cookies to improve your experience while you navigate through the website. Out of these, the cookies that are categorized as necessary are stored on your browser as they are essential for the working of basic functionalities of the website. We also use third-party cookies that help us analyze and understand how you use this website. These cookies will be stored in your browser only with your consent. You also have the option to opt-out of these cookies. But opting out of some of these cookies may affect your browsing experience.
Necessary Always Enabled

Performance cookies are used to understand and analyze the key performance indexes of the website which helps in delivering a better user experience for the visitors.

Analytical cookies are used to understand how visitors interact with the website. These cookies help provide information on metrics the number of visitors, bounce rate, traffic source, etc.

Advertisement cookies are used to provide visitors with relevant ads and marketing campaigns. These cookies track visitors across websites and collect information to provide customized ads.

Other uncategorized cookies are those that are being analyzed and have not been classified into a category as yet.